Accueil > Publications > Proust at the Movies 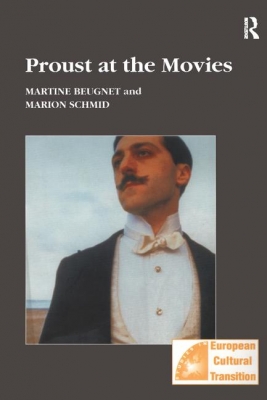 Film established itself as an artistic form of expression at the same time that Proust started work on his masterpiece, A la recherche du temps perdu. If Proust apparently took little interest in what he described as a poor avatar of reductive, mimetic representation, the resonances between his own radical reworking of writing styles and the novelistic forms, and cinema as the art of time are undeniable.

Proust at the Movies is the first study in English to consider these rich interconnections. Its introductory chapter charts the missed encounter between Proust and the cinema and addresses the problems inherent in adapting his novel to the screen.

The last chapter tracks the echoes of Proust’s writing in the work of various directors, from Abel Grace to Jean-Luc Godard. The approach is multidisciplinary, combining literary criticism with film theory and elements of philosophy of art. Special attention is given to the modernist legacy in literature and film with its distinctive aesthetic and narrative features. An outline of the history and recent evolution of contemporary art cinema thus emerges: a cinema where the themes at the heart of Proust’s work – memory, time, perception – are ceaselessly explored.

Proust and the cinema