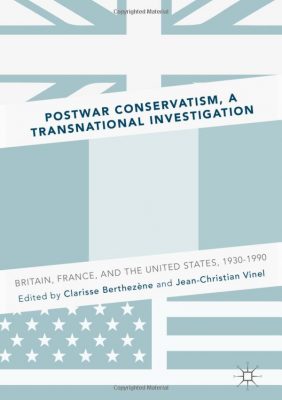 This volume offers a unique comparative perspective on post-war conservatism, as it traces the rise and mutations of conservative ideas in three countries – Britain, France and the United States – across a ‘short’ twentieth century (1929-1990) and examines the reconfiguration of conservatism as a transnational phenomenon.

This framework allows for an important and distinctive point –the 1980s were less a conservative revolution than a moment when conservatism, understood in Burkean terms, was outflanked by its various satellites and political avatars, namely, populism, neoliberalism, reaction and cultural and gender traditionalism. No long running, unique ‘conservative mind’ comes out of this book’s transnational investigation.

The 1980s did not witness the ascendancy of a movement with deep roots in the 18th century reaction to the French Revolution, but rather the decline of conservatism and the rise of movements and rhetoric that had remained marginal to traditional conservatism.

1. The Uses and Abuses of the Scottish Enlightenment in Modern Conservatism
Colin kidd

2. The Theory and Practice of Conservative Propaganda and Organisation in Britain and France in the Interwar Years
kevin Passmore

6. The Institutionalization of Tax Revolt in France and the United States
Alexis Spire

7. French Management Conservatism in Action: The Individualization of Labor Bargaining and Managerial Uses of the Law
Guy Groux

10. George Wallace and Enoch Powell: Comparing the Politics of Populist Conservatism in the USA and the UK
Michael kazin and Stéphane Porion

11. ‘Liberty Finds No Refuge in a Jurisprudence of Doubt’: Sexual Morality as Seen by Supreme Courts in France and the USA
Marc Olivier BaruchIndex