French Film and the Art of Transgression 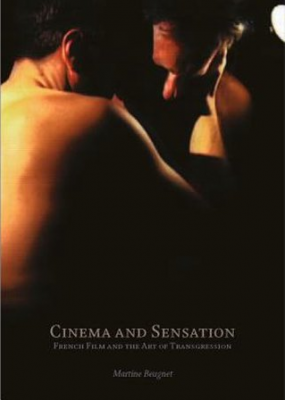 This book looks at a much-debated phenomenon in contemporary cinema: the re-emergence of filmmaking practices – and, by extension, of theoretical approaches – that give precedence to cinema as the medium of sensation. France offers an intriguing case in point here. A specific sense of momentum comes from the work of a group of filmmakers bent on exploring cinema’s unique capacity to move us both viscerally and intellectually.

Though extremely diverse, the films of Olivier Assayas, Catherine Breillat, Claire Denis, Vincent Dieutre, Bruno Dumont, Bertrand Bonello, Philippe Grandrieux, Pascal Ferrand and Nicolas Klotz, to name but a few, demonstrate a characteristic awareness of cinema’s sensory impact and transgressive nature. In effect, with its interweaving of theoretical enquiry and film analysis, and its emphasis on the materiality of film, Cinema and Sensation’s approach could also apply to the work of comparable filmmakers like David Lynch, Abel Ferrara or Wong Kar-Wai.

Cinema and Sensation draws on the writings of Antonin Artaud, George Bataille and Gilles Deleuze, whilst also responding to the continuing interest in theories of haptic visuality (Laura Marks) and embodied spectatorship (Vivian Sobchack) inspired by Maurice Merleau-Ponty’s phenomenology.Explored as forms of embodied thought, the films are shown to offer alternative ways of approaching key existential and socio-cultural questions: desire, violence and abjection as well as the growing supremacy of technology, globalisation, exile and exclusion – these are the themes and issues that appear embedded here in the very texture of images and sounds.