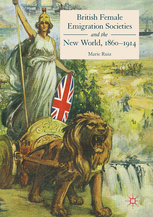 This book focuses on the departure of Britain’s ‘surplus’ women to Australia and New Zealand organised by Victorian British female emigration societies. Starting with an analysis of the surplus of women question, it then explores the philanthropic nature of the organisations (the Female Middle Class Emigration Society, the Women’s Emigration Society, the British Women’s Emigration Association, and the Church Emigration Society). The study of the strict selection of distressed gentlewomen emigrants is followed by an analysis of their marketing value, and an appraisal of women’s imperialism. Finally, this work shows that the female emigrants under study partook in the consolidation of the colonial middle-class.