This research group is devoted to the history and politics of English-speaking countries, using methodological tools from social, intellectual and cultural history to ask questions about political identities and political subjectivities, and about the interconnectedness of politics and everyday life. History is understood in a longue durée, with scholars working on the 17th century to the 21st century. The aim of our group is stimulate interdisciplinary research across the social sciences and develop work cutting across time periods, questioning the nature of an ‘English-speaking’ world and its boundaries and looking at its links to the wider world.

The group’s research is organised around five main themes:

The group has close connections with the research group on gender and the different transversal groups (Writing history from the margins;  popular classes ; material culture) which stem from the History group.

In early 2021, the LARCA history* research group launched a reading group. Co-organised by Laura Carter and John-Erik Hansson, it gives LARCA members an opportunity to engage collectively with new research in the modern history of the English-speaking world(s)** (18th-21st centuries). The reading group convenes four times a year (twice per term), with each session focusing on one book. 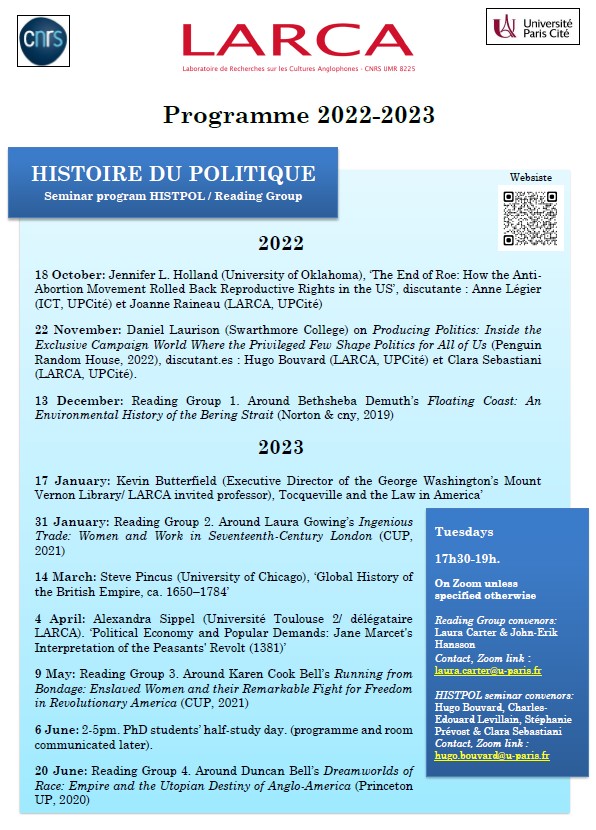