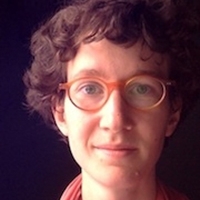 Eliane de Larminat has been working since 2010 on urban and dwelling imaginaries in the US, through a mostly photographic corpus and in an interdisciplinary perspective. She studied at the ENS-Ulm, holds the “Agrégation d’anglais,” and her master’s research was distinguished by the Prix Roland Barthes (2015). She conducted research as a visiting student at Harvard University in 2013-2014 and as a Fulbright fellow at Northwestern University in 2016.