In the interwar period, wire photography services began using a device similar to a fax machine to separate images from their material supports as analogue information. Communications hubs such as New York, London, and Buenos Aires formed the core of an Atlantic network in which news pictures circulated by wire, radio, and airplane. However, only with great difficulty could this network reach beyond the places where visual telecommunications infrastructure, and its attendant media such as halftone photoengraving and daily newspapers, existed. In this talk, I will show how the production of this space also constituted a liminal zone as its exterior, by addressing the American Office of War Information’s attempt to integrate Central Africa into this system during World War Two. In Central Africa, difficult material conditions for telecommunications and printing coincided with colonial social and political dynamics to frustrate attempts to connect Africans to a larger visual public sphere.

Jonathan Dentler is currently the Terra Foundation for American Art Postdoctoral Research and Teaching Fellow in Paris, where he is associated with the LARCA and HAR research groups at the Université de Paris and Université Paris Nanterre. He recently received his Ph.D. from USC, and his dissertation is a global history of wire photography services. 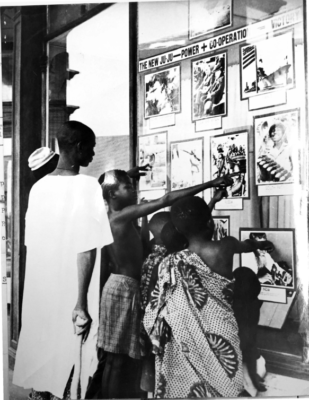 In 2021-22,  the webinar will look at the intersections between visual and material culture: from 20th century photography to Renaissance miniature portraits and from paper collages to ads for canned food, we’ll be examining the links between visuality and materiality.

Research on the history, materials and conservation of early English portrait miniatures has seen a wide range of new and exciting developments over the past decades in the UK and beyond. Most of these technical and analytical approaches have focused on the paint media and pigments rather than the supports of these artworks.

I will thus be offering an analysis of the use of vellum in Elizabethan and Jacobean English portrait miniatures. Following in the footsteps of scholars who have worked on the materiality of medieval manuscripts – and most recently among them Sarah Kay in Animal Skins and the Reading Self in Medieval Latin and French Bestiaries (Chicago and London: University of Chicago Press, 2017) – I will inquire into the meaning of early modern limners’ predilection for vellum. This will lead me to look into the technical literature produced at the time, thereby probing into the limner’s way of handling animal skin in the rendering of human skin.

Anne-Valérie Dulac is senior lecturer in Elizabethan studies at Sorbonne Université and currently holds a fellowship with LARCA (https://larca.u-paris.fr/en/home/) and the Maison Française d’Oxford (https://www.mfo.ac.uk). Her research interests include the circulation of artistic terminology in early modern Europe, animal-made objects used by limners, the portraiture of all living things in Elizabethan and Jacobean England and the rendering of lustre in watercolour. She is finishing a monograph on limning in English early modern drama as well as translating (with Céline Cachaud) Nicholas Hilliard’s Art of Limning into French. 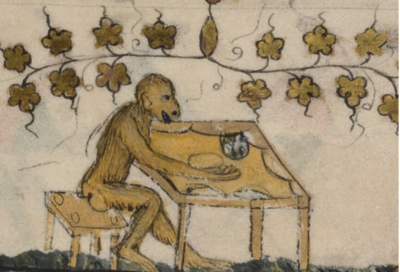 The public housing program established in the late 1930s in Chicago involved multiple everyday concerns for the local housing authority: constructing and managing buildings, reforming the residents in socio-cultural terms, and reinforcing the political legitimacy of publicly-owned housing. All these objectives involved tending to the sites of public housing as sights – as experienced in the urban landscape or in various forms of illustrated communication. This talk will focus on a collection of Kodachrome colored slides documenting gardening endeavors in Chicago housing projects in the late 1940s. It will relate these visual objects both to how they were shown and to the practices they show. While studying how the gardening program capitalized on different  forms of sensorial activation between project grounds and projected slides, this presentation will shed light on how the visual and the material met in this particular use of the colored slide projection at mid-century.

Éliane de Larminat is an associate professor (MCF) in anglophone studies/visual studies at Université de Paris. She is the author of Houses & Homes: Photographier la maison aux États-Unis, 1930-1990 (2020) and wrote a PhD dissertation about photographic images in the history of public housing in Chicago (1937-2000).

In the 1790s, when the cousins Jane and Mary Parminter of ‘A la Ronde’ (the house in which they lived together in Exmouth, Devon) ornamented the surfaces of their home with shells, paper, feathers, and bones, they were engaging in an aesthetic and intellectual tradition of collage production that had been prevalent for decades, and which would endure throughout the nineteenth century. Nevertheless, thanks to the low status occupied by women’s craft practices in the art historical canon, collage produced during this period has consistently been overlooked in histories of the genre, which usually attribute the invention of collage to the Cubist artists Pablo Picasso and Georges Braque in 1912. This critical neglect has reinforced entrenched hierarchies within art history; differences between ‘high’ and ‘low’ art; divisions of modern and pre-modern; and the gendered separation between artist and amateur. This paper argues that collage produced in the eighteenth and nineteenth centuries represents a vital moment in its history, when an unprecedented variety of composite objects proliferated thanks to the new availability of material and printed goods that characterised this period.

Dr Freya Gowrley is lecturer in History of Art and Liberal Arts at the University of Bristol. Her research explores eighteenth- and nineteenth-century visual and material culture, with a focus on the home, the collaged object, and the body. Her book Domestic Space in Britain, 1750–1840: Materiality, Sociability and Emotion is forthcoming from Bloomsbury Academic in 2022. 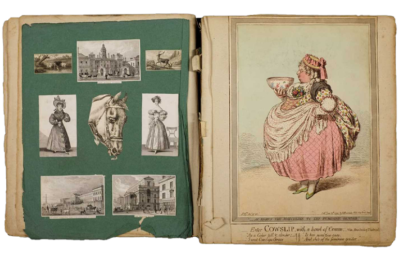 In a 2000 article, Simon Naylor called attention to the ways that a mundane, mass-produced commodity – canned food – shaped conceptions of space in the nineteenth century. Canned food was perceived as a technological triumph that collapsed “distances between sites of food production and consumption” and aided the expansion of European empires by feeding soldiers and explorers cheaply. But how did the agents of Western empires materially experience this collapse of distance? And how did consumers in Europe and the United States understand cans as tools for the spread of colonial values?

This paper examines writings from British and American explorers, who increasingly relied on canned food for sustenance in the nineteenth century, and a series of trade cards and other advertisements drawn primarily from the Jay T. Last Collection of Ephemera at the Huntington Library. Focusing on canned meat as a case study, the paper argues that explorers experienced canned food as a vehicle for recreating the comforts of home in extreme environments. Canned provisions held the promise of freeing explorers from their reliance on locally-sourced food, and thus local Indigenous intermediaries. However, the unpalatable taste of much canned meat, failures in the canning process, and the physical weight of these provisions demonstrated the vulnerabilities of expeditions as colonial enterprises and triumphs of technology. At the same time, though, these vulnerabilities were glossed over in advertising materials for British and American consumers, which presented preserved meat as a material good for expanding Western influence, one which – in the words of one trade card – could be found “wherever civilized man dwells.”

Sarah Pickman is a Ph.D. candidate at Yale University in the Department of History – Program in History of Science and Medicine. Her research examines the material culture of British and American exploration in the long nineteenth century, with a focus on mundane goods such as clothing, food, and furniture, and their connections to Anglophone ideas of comfort, domesticity, and commodity culture. Her work on polar explorers’ clothing was published in the catalogue Expedition: Fashion from the Extreme (Thames & Hudson, 2017). Her research has been supported by grants from the Huntington Library, Hagley Museum and Library, and American Geographical Society Library.