A conversation with Professor Ladan Niayesh

In Michaelmas 2020 Professor Ladan Niayesh (Université de Paris) joined TIDE as an Honorary Research Associate and Visiting Fellow at Exeter College. At the end of term, before her return to Paris, we spoke about her research, its political ramifications, and Tai chi. 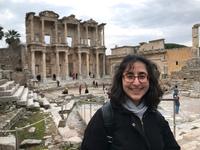 What research have you been working on during your visit?

I’ve been focusing on two projects, both deriving from the collective editorial work on Hakluyt’s Principal Navigations for OUP. My section is the Muscovy Company documents on Persia and Russia, which I coedit with Ralph Cleminson, a specialist of Slavonic studies. Analysing and cross-referencing that material helped me see just how much interactions with Russia’s new empire affected England’s own articulation of its imperial project, in Hakluyt and beyond. This is what got me started on a short monograph about English experimentations – both ideological and practical – with race and empire in Russia. That work is contracted to CUP, and will appear in the new ‘Cambridge Elements of Travel Writing’ series, under the general editorship of Nandini Das and Tim Youngs. My other work is a continuation of editorial interest related to Persia. This one is an edition of documents on the diplomatic missions of the Sherley brothers to and from Shah Abbas of Persia. I am coediting that with Kurosh Meshkat and Alasdair MacDonald for the Hakluyt Society.