The New Deal and Its Legacies 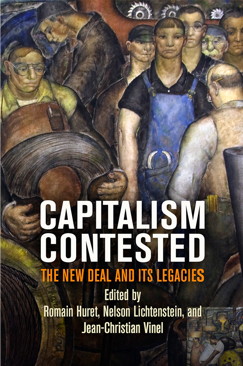 In the historical narrative that prevails today, the New Deal years are positioned between two equally despised Gilded Ages—the first in the late nineteenth century and the second characterized by the world of Walmart, globalization, and right-wing populism in which we currently live. What defines these two ages is an increasing level of inequality legitimized by powerful ideologies, namely, Social Darwinism at the end of the nineteenth century and neoliberalism today. In stark contrast, the era of the New Deal was first and foremost an attempt to put an end to inequality in American society. In the historical longue durée, it appears today as a kind of golden age when policymakers and citizens sought to devise solutions to the two major « questions »—labor on one side, social on the other—that were at the heart of the American political economy during the twentieth century.

Capitalism Contested argues that the New Deal order remains an effective framework to make sense of the transformation of American political economy over the last hundred years. Contributors offer an historicized analysis of the degree to which that political, economic, and ideological order persists and the ways in which it has been transcended or even overthrown. The essays pay attention not only to those ideas and social forces hostile to the New Deal, but to the contradictions and debilities that were present at the inauguration or became inherent within this liberal impulse during the last half of the twentieth century. The unifying thematic among the essays consists not in their subject matter—politics, political economy, social thought, and legal scholarship are represented—but in a historical quest to assess the transformation and fate of an economic and policy order nearly a century after its creation.

Romain Huret is a professor at the School of Advanced Studies in the Social Sciences in Paris. He is author of numerous books, including American Tax Resisters and The Experts’ War on Poverty.

Nelson Lichtenstein is Distinguished Professor of History at the University of California, Santa Barbara, where he directs the Center for the Study of Work, Labor, and Democracy. He is author or editor of numerous books, including The Port Huron Statement: Sources and Legacies of the New Left’s Founding Manifesto and The Right and Labor in America: Politics, Ideology, and Imagination, both available from the University of Pennsylvania Press.

Jean-Christian Vinel teaches American history at Université de Paris. He is author of The Employee: A Political History, also available from the University of Pennsylvania Press.

Part I. The Political Economy of New Deal Reformism

Chapter 3. The Triumph of the Mixed Economy: The New Deal Order, Keynes, and the Genius of American Liberalism
Jason Scott Smith

Chapter 6. Financing Security and Opportunity: The New Deal and the Origins of the Millennial Student Debt Crisis
Elizabeth Tandy Shermer

Chapter 7. The Shackles of the Past: Constitutional Property Tax Limitations and the Fall of the New Deal Order
Isaac William Martin

Part III. Capital and Labor in the Twilight of the New Deal

Chapter 9. Economic Royalists and Their Kingdom in the New Deal Era and Beyond
Nelson Lichtenstein

Chapter 10. The High-Tech Revolution and the Disruption of American Capitalism
Margaret O’Mara

Chapter 11. The Other Operation Dixie: Public Employees and the Resilience of Urban Liberalism
William P. Jones