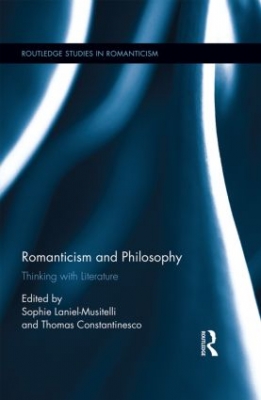 This volume brings together a wide range of scholars to offer new perspectives on the relationship between Romanticism and philosophy. The entanglement of Romantic literature with philosophy is increasingly recognized, just as Romanticism is increasingly viewed as European and Transatlantic, yet few studies combine these coordinates and consider the philosophical significance of distinctly literary questions in British and American Romantic writings.

The essays in this book are concerned with literary writing as a form of thinking, investigating the many ways in which Romantic literature across the Atlantic engages with European thought, from 18th– and 19th-century philosophy to contemporary theory. The contributors read Romantic texts both as critical responses to the major debates that have shaped the history of philosophy, and as thought experiments in their own right.

This volume thus examines anew the poetic philosophy of Wordsworth, Coleridge, Blake, Shelley, and Clare, also extending beyond poetry to consider other literary genres as philosophically significant, such as Jane Austen’s novels, De Quincey’s autofiction, Edgar Allan Poe’s tales, or Emerson’s essays. Grounded in complementary theoretical backgrounds and reading practices, the various contributions draw on an impressive array of writers and thinkers and challenge our understanding not only of Romanticism, but also of what we have come to think of as « literature » and « philosophy. »

Part I: Romantic Confrontations
1. Absolut Jena: A Second Look at Lacoue-Labarthe’s and Nancy’s Representation of the Literary Theory of Frühromantik Christoph Bode
2. History and Poetry: Fundamental Aspects and Affects of the Relations between Literature and Philosophy in English Romanticism Eric Dayre
3. « Ghostly Language »: Spectral Presences and Subjectivity in Wordsworth’s Salisbury Plain Poems Mark Sandy
4. Thinking without Being and Acts of Poetry in Shelley Arkady Plotnitsky