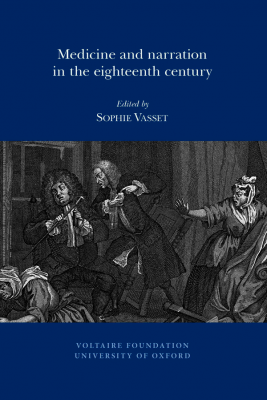 How did doctors argue in eighteenth-century medical pamphlet wars? How literary, or clinical, is Diderot’s depiction of mad nuns? What is at stake in the account of a cataract operation at the beginning of Jean-Paul’s novel Hesperus? In this pioneering volume, contributors extend current research at the intersection of medicine and literature by examining the overlapping narrative strategies in the writings of both novelists and doctors.

Focusing on a wide variety of sources, an interdisciplinary team of researchers explores the nature and function of narration as an underlying principle of such writing. From a reading of correspondence between doctors as a means of continuing professional education, to the use of inoculation as a plotting device, or an examination of Diderot’s physiological approach to mental illness in La Religieuse, contributors highlight:

• how doctors exploited rhetorical techniques in both clinical writing and correspondence with patients.

• how novelists incorporated medical knowledge into their narratives.

• how models such as case-histories or narrative poetry were adopted and transformed in both fictional and actual medical writing.

• how these narrative strategies shaped the way in which doctors, patients and illnesses were represented and perceived in the eighteenth century.

Sophie Vasset, How to relate a medical case: the controversy about John Ranby’s Narrative of the last illness of the earl of Orford (1745)

David Shuttleton, ‘Not the meanest part of my works and experience’: Dr George Cheyne’s correspondence with Samuel Richardson

Gavin Budge, Smollett and the novel of irritability

Sylvie Kleiman-Lafon, The healing power of words: medicine and literature in Bernard Mandeville’s Treatise of the hypochondriack and hysterick diseases

‘[…] the essays improve our knowledge of how the history of science and medicine converge with the literature of the eighteenth century. This book must be commended for each piece’s lively and accessible writing, making it an enjoyable read for both historians and literary scholars.’