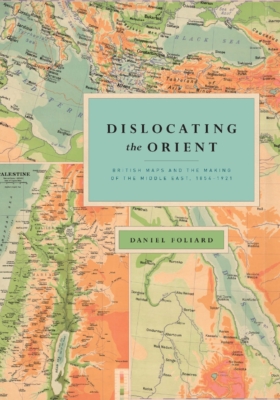 While the twentieth century’s conflicting visions and exploitation of the Middle East are well documented, the origins of the concept of the Middle East itself have been largely ignored. With Dislocating the Orient, Daniel Foliard tells the story of how the land was brought into being, exploring how maps, knowledge, and blind ignorance all participated in the construction of this imagined region. Foliard vividly illustrates how the British first defined the Middle East as a geopolitical and cartographic region in the nineteenth and early twentieth centuries through their imperial maps. Until then, the region had never been clearly distinguished from “the East” or “the Orient.” In the course of their colonial activities, however, the British began to conceive of the Middle East as a separate and distinct part of the world, with consequences that continue to be felt today. As they reimagined boundaries, the British produced, disputed, and finally dramatically transformed the geography of the area—both culturally and physically—over the course of their colonial era.

Using a wide variety of primary texts and historical maps to show how the idea of the Middle East came into being, Dislocating the Orient will interest historians of the Middle East, the British empire, cultural geography, and cartography.