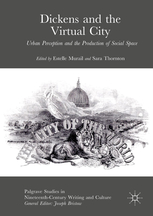 This book explores the aesthetic practices used by Dickens to make the space which we have come to know as the Dickensian City.

It concentrates on three very precise techniques for the production of social space (counter-mapping, overlaying and troping).

The chapters show the scapes and writings which influenced him and the way he transformed them, packaged them and passed them on for future use.

The city is shown to be an imagined or virtual world but with a serious aim for a serious game: Dickens sets up a workshop for the simulation of real societies and cities.

This urban building with is transferable to other literatures and medial forms.

The book offers vital understanding of how writing and image work in particular ways to recreate and re-enchant society and the built environment. It will be of interest to scholars of literature, media, film, urban studies, politics and economics.

Sara Thornton is Professor of English at the University of Paris Diderot, France, where she teaches nineteenth-century literature and cultural studies. She is president of the SFEVE (Société Française d’Etudes Victoriennes et Edouardiennes). She has published Advertising, Subjectivity and the Nineteenth-Century Novel (Palgrave Macmillan, 2009), David Copperfield (2006), Circulation and Transfer of Key Scenes in Nineteenth-Century Literature (2010), Persistent Dickens (with Alain Jumeau, 2012), and Littérature et publicité (co-edited with L. Guellec and F. Hache-Bissette, 2012). She is currently working on the way aesthetics responds to economic pressures in the nineteenth-century in Britain and the Empire.