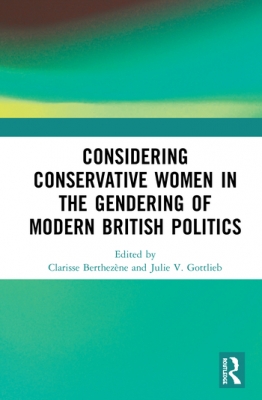 This volume examines how the British Conservative Party has appealed to women, the roles that women have played in the party, and the tense relationship between women’s activism on the Right and feminism. Covering the period since the early 20th century, the contributions each question assumptions about the reactionary response of the British Right, Margaret Thatcher’s party, to women’s issues and to their political aspirations.

How have women been mobilized by the Conservative Party? What kind of party appeals has the British Conservative Party designed to attract women as party workers and as voters? Developing successful strategies to attract women voters since 1918, and appealing to certain notional women’s issues, and having produced the only two women Prime Minters of the UK, the Conservative Party has its own special relationship with women in the modern period. The shifting status of women and opportunities for women in politics in modern Britain has been garnering more scholarly attention recently, and the centenary of women’s partial suffrage in 2018 and Astor 100 in 2019 has done much to excite wider attention and public interest in these debates. However, the role of Conservative women has too often been seen as problematic, especially because of general assumption that feminism is only allied to leftist movements and political positions. This volume explores these themes through a range of case studies, covering the period from the early 20th to the 21st century.

The chapters in this book were originally published as a special issue of the journal, Women’s History Review.

5. Housewives having a go: Margaret Thatcher, Mary Whitehouse and the appeal of the Right Wing Woman in late twentieth-century Britain

6. Free markets and feminism: the neo-liberal defence of the male breadwinner model in Britain, c. 1980–1997