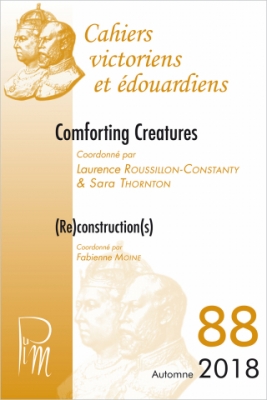 The first meaning of the expression ‘creature comforts’ which informs the title of this collection is that of bodily comfort. It is difficult not to associate the desire for physical well-being with the Victorians who valued plump upholstery, good plumbing, rich cuisine and soft furnishings.1 The Victorian body, as the novels and advertisements that catered to it show us, needed objects, services, materials, victuals, many of which were animal in origin; mammals, birds, insects, fish and crustaceans were alternatively food, pets, clothing, transportation, labour, decorations or artefacts to be consumed, petted, worn, illustrated, admired, ridden or stuffed and stared at under glass. Creatures provided comfort in many ways and were indeed ‘comforting’, yet that exploitative relationship was complicated by another human need, the need to ‘comfort’ in their affliction the very creatures which humanity had enslaved; woven into the term ‘creature comforts’ is an acknowledgement of that affliction which this study will reveal.2 Already present in this supplement to the relationship between humanity and the non-human was a desire for reciprocity: comfort was not only a way of deriving pleasure from animals but involved seeking an understanding of them and a dialogue with them, forming empathetic ties, comforting them in the sense of helping and deferring to them, ceding to them, not only as pets or commodities but as potential subjectivities. In turn, the words ‘comforting creatures’ may be seen as the secondary pleasure derived by humans in liberating animals from an abject position.

The Victorian relationship with animals was a complex one and helped form our own equally complex vision of the creature-world today in which veganism fights its ground against the mass consumption of meat. Activists try to make visible the speciesism that informs global societal values. While the Americas and China are continuing to buy tracts of land to boost beef production, others are questioning the need to kill fellow creatures to consume them; or to put it more broadly and in more philosophical terms, a percentage of the human population is questioning, and has always questioned, the assignment of different rights to individuals according to their species membership. Speciesism has been likened to racism or sexism since it involves discrimination based on physical difference, while human speciesism, a form of human supremacism which excludes non-human animals from the rights and protections given to humans, has been a focus of enquiry since the earliest times.3 Pythagoras, who posited the notion of animism which suggested that animals shared the same kind of soul or spirit with man, making man one with animals, is one early example; he was considered to be one of the first animal liberation activists, buying animals at the market to free them.4 Creatures continued to be the focus of philosophical and religious thought as the Book of Genesis shows us: ‘Then God said, “Let Us make man in Our image, according to Our likeness; and let them rule over the fish of the sea and over the birds of the sky and over the cattle and over all the earth, and over every creeping thing that creeps on the earth”’ (1:26). Exegetes and philosophers of all kinds, including some eminent eighteenth- and nineteenth-century thinkers, have argued in different ways that ‘dominion’ refers not to ownership but to stewardship which contains notions of friendship and ethical responsibility.5 Voltaire defended animals through the dog which (or rather who) seeks his Master desperately and then shows his joy at finding him, only to be nailed to a dissection table.6 We might also mention Jean-Jacques Rousseau who argued in Discourse on Inequality (1754) for the inclusion of animals in natural law on the grounds of their sentience. Percy Bysshe Shelley defended a vegetarian diet7 while Charles Darwin in The Descent of Man (1871) argued that there was no fundamental difference between man and the higher mammals in their mental faculties, attributing to animals the power of reason, decision-making, memory, sympathy, and even imagination.8 Martha Nussbaum writes that utilitarianism, starting with Jeremy Bentham and later John Stuart Mill, has contributed more to the recognition of the moral status of animals than any other ethical theory, while Peter Singer argues from a preference-utilitarian perspective that speciesism violates the principle of equal consideration of interests, an idea that John Stuart Mill, in Utilitarianism (1861), attributed to Jeremy Bentham: ‘each to count for one, and none for more than one’.9 One year into the Victorian era, the trial of Bill Burns (1838) saw a donkey which had been beaten by his owner led into the courtroom and, in a ruling which Friedrich Nietzsche would have found pertinent,10 the world’s first known conviction for animal cruelty resulted. Nineteenth-century Britain played a great role in the advancing of the animal protection movement which was praised by Arthur Schopenhauer in On The Basis of Morality (1840): ‘To the honour, then, of the English, be it said that they are the first people who have, in downright earnest, extended the protecting arm of the law to animals’.11 This pan-European blossoming of animal rights discourses in the nineteenth century was part of the rationale behind the ‘Becoming Animal with the Victorians’ conference held in Paris in 2016.

This is the second volume of articles from that event, which was 100% vegan despite the fact that Paris was still not an easy place to be vegan. The Indian chefs at a local Italian restaurant, no strangers to veganism, helped us imagine a vegan pizza from scratch while the Tunisian manager of a tagine and couscous restaurant nearby showed us that Tunisian, Algerian and Moroccan cuisine could easily become vegan.12 Fabienne Moine, one of the organisers of the conference not only helped deal with the practical and prandial aspects of the event but made sure the conceptual and theoretical aspects were also up to scratch. Her excellent introduction to the first volume of articles explains the importance of the title chosen for the conference: in ‘Becoming animal with the Victorians’, the concept of ‘becoming-animal’ that Gilles Deleuze and Felix Guattari develop in a number of their writings13 seems to question animal-human boundaries and to creatively stretch the limits of the human—not only in terms of metamorphosis but through the possibility of new identities and the freedom to become something other than oneself. The title of the conference also gestures ironically at the idea that animals ‘become’ us—that they suit or enhance us since the Victorians literally wore them but also wanted to become like them—run wild, forget to be human, forget to be Victorian. That first volume traces the emergence and expansion of animal studies in Britain and France and gives a comprehensive analysis of how French historians and theorists have approached the subject from Robert Delort to Jacques Derrida and David Wills in The Animal That Therefore I Am, through Eric Baratay, Michel Pastoureau, Damien Baldin and Victoria Vanneau on animal rights and the law and the recent ‘Animots’ project. Fabienne Moine notes the comparatively scant attention paid to the subject by French scholars specialising in nineteenth-century Britain but lauds the impetus provided by Michel Prum, a French authority on Darwin and nineteenth-century civilisation, who first suggested to us the idea of a Victorianist conference on Animals.14 The seven articles in that first collection all address the question of the breaking down of barriers between human and non-human through the tropes of transformation, evolution, regression and hybridity.

This the second volume, building on the first, considers the various ways in which creatures comforted human beings in the nineteenth-century, and became them not only in the sense of enhancing and suiting them but also by virtue of that human-animal ability to grow together in trust and tenderness. By imaginatively taking up their featured animals’ positions, in a gesture of empathy that Adam Smith might have called ‘Animal Sympathy’, the nine articles all suggest, in different ways, that the full span of emotions felt and exchanged between humans and non-humans has yet to be realised.15 This collection also enquires into the different ways Victorians express their tricky relationship with animals, their speciesism, as well as into their attempts to rethink the question of ‘species’ and the values and rights attached to it.16 Many of the articles do not overtly address activist writers or thinkers but look at literature, image, reportage and print culture as forms of politics in action. The contributors to the volume show politics and aesthetics working in tandem within representation, and find the politics in the interstices of poetics, design, and reportage; in the drawn line of illustration; and within narrative. They look at the varied emotions which humans exchange with animals and how their sense of being is tied up with their interactions with animals, sometimes revisiting the Hegelian idea of the Master’s reliance for his sense of existence on the slave. They examine in different ways the awakening in the Victorians of a realisation that somehow animals are us as opposed to the easier, more Darwinian idea that we are animals. This accepting of the otherness of non-human creatures goes beyond the condescension of the mini-me syndrome since it obliges the perceiver to leave the comfort zone of the centrality of the human and venture out into a new world of competing and ultimately co-operating othernesses.