Accueil > Publications > Bellies, Bowels and Entrails in the Eighteenth Century 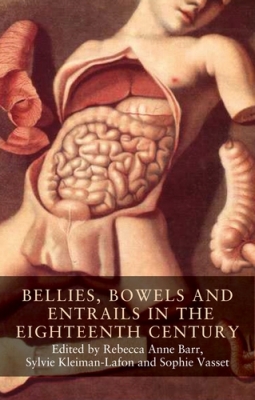 This collection of essays seeks to challenge the notion of the supremacy of the brain as the key organ of the Enlightenment, by focusing on the workings of the bowels and viscera that so obsessed writers and thinkers during the long eighteenth-century. These inner organs and the digestive process acted as counterpoints to politeness and other modes of refined sociability, drawing attention to the deeper workings of the self. Moving beyond recent studies of luxury and conspicuous consumption, where dysfunctional bowels have been represented as a symptom of excess, this book seeks to explore other manifestations of the visceral and to explain how the bowels played a crucial part in eighteenth-century emotions and perceptions of the self. The collection offers an interdisciplinary and cross-cultural perspective on entrails and digestion by addressing urban history, visual studies, literature, medical history, religious history, and material culture in England, France, and Germany.

Part I: Urban congestion and human digestion
1. The belly and the viscera of the capital city – Gilles Thomas
2. The intestinal labours of Paris – Sabine Barles and André Guillerme
3. Digesting in the long eighteenth century – Ian Miller
4. The soul in the entrails: the experience of the sick in the eighteenth century – Micheline Louis-Courvoisier

Part IV: Visualising the viscera
13. Iconography of the belly: eighteenth-century satirical prints – Barbara Stentz
14. Visceral visions: art, pedagogy and politics in Revolutionary France – Dorothy Johnson
15. The saints of the entrails and the bowels of the earth – Jacques Gélis

« The fart, unpent, that croons its air / Often foils death, dispels despair. » Bellies, bowels and entrails, while it contains a wealth of material with comic potential that was often realised, is certainly not destined to be ‘bumfodder’, a common fate for much eighteenth-century literature. This fascinating, scholarly and entertaining examination of all things digestive advances the burgeoning field of stomach studies, especially by giving it a multi-disciplinary and European perspective. Any reader interested in the eighteenth century, or in medical humanities generally, will find this excellent volume crucial to their understanding of the practicalities and metaphorics of this most fundamental (forgive the pun) area of human experience. »
Clark Lawlor, Professor of Eighteenth-Century English Literature at Northumbria University

‘One does not have to venture very far into eighteenth-century literary and artistic culture to come across distended bellies, visceral obsessions and technicolour excretions. Bellies, bowels and entrails presents an adventurous exploration of this dimension of the eighteenth-century world, engaging with a gloriously Rabelaisian array of forms of human viscerality. Bringing together high-calibre essays from a wide range of disciplinary fields, the volume manages to be as consistently absorbing and enlightening as it is entertaining, amusing and affecting.’
Colin Jones, Professor of History at Queen Mary University of London