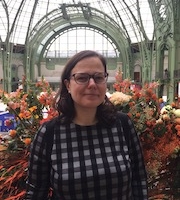 Currently, I am working on a book project entitled Shattered Ground: American Art and Spatial Imagination in the 1940s. It focuses on the dramatic shift in the perception and representation of space that occurred in American art during World War II. The experience of war, its technologies and visual vocabulary, dramatically transformed the concept of worldspace in the cultural discourse, leading to the probing and reworking of various conventions of spatial representation. This book is motivated by the questions of how this transformation affected art and visual culture in the United States, as well as its lasting influence on American popular imagination in the second half of the twentieth century.