Home > Training minds for the war of ideas

Ashridge College, the Conservative Party and the cultural politics of Britain, 1929–54 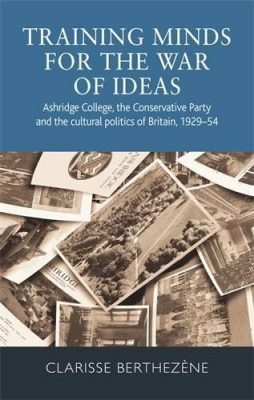 This book examines attempts by the Conservative party in the interwar years to capture the ‘brains’ of the new electorate and create a counter-culture to what they saw as the intellectual hegemony of the Left.

It tells the fascinating story of the Bonar Law Memorial College, Ashridge, founded in 1929 as a ‘College of citizenship’ to provide political education through both teaching and publications. The College aimed at creating ‘Conservative Fabians’ who were to publish and disseminate Conservative literature, which meant not only explicitly political works but literary, historical and cultural work that carried implicit Conservative messages.

Winner of the 2016 PSA Group Prize for the best publication on conservatism.

3. The Conservative party and the middle classes

4. Ashridge and the student community

5. Redefining the principles of conservatism

6. The Tory interpretation of History

8. Fighting the ‘battle of the brows’

10. Ashridge and the media