Gender and the Conservative Party, 1880s to the present 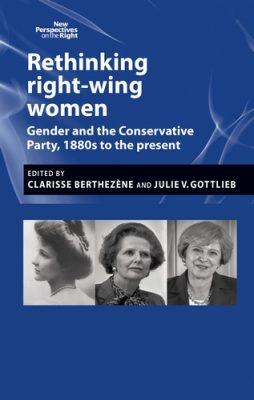 Rethinking Right-Wing Women explores the institutional structures for and the representations, mobilisation, and the political careers of women in the British Conservative Party since the late 19th century. From the Primrose League (est.1883) to Women2Win (est.2005), the party has exploited women’s political commitment and their social power from the grass-roots to the heights of the establishment.

Yet, although it is the party that extended the equal franchise, had the first woman MP to sit Parliament, and produced the first two women Prime Ministers, the UK Conservative Party has developed political roles for women that jar with feminist and progressive agendas. Conservative women have tended to be more concerned about the fulfilment of women’s duties than the realisation of women’s rights.

This book tackles the ambivalences between women’s politicisation and women’s emancipation in the history of Britain’s most electorally successful and hegemonic political party.

3. At the heart of the party? The women’s Conservative organisation in the age of partial suffrage, 1914-1928 – David Thackeray

5. Modes and models of Conservative women’s leadership in the 1930s – Julie Gottlieb

6. The middlebrow and the making of a ‘new common sense’: Women’s voluntarism, Conservative politics and representations of womanhood – Clarisse Berthezène

7. Churchill, women, and the politics of gender – Richard Toye

8. ‘The Statutory Woman whose Main Task was to Explore what Women were Likely to Think.’ Margaret Thatcher and Women’s Politics in the 1950s and 1960s – Krista Cowman

12. Conserving Conservative women: A view from the archives – Jeremy McIlwaine

13. Women2Win and the feminization of the UK Conservative party – Baroness Ann Jenkin with an introduction by Sarah Childs