The Politics and Policies of an Embattled Presidency 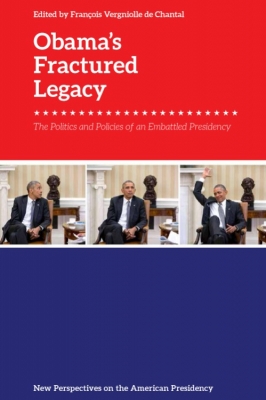 Featuring a range of experts on the American presidency, this book offers both European and American perspectives on both the successes and failures of President Obama’s tenure in the White House.

Focusing primarily on domestic policy, these essays explain why Obama’s widely anticipated moment of change did not fully materialise. The Obama presidency navigated partisan and institutional obstacles, but quickly lost its 2008 momentum. These developments illustrate the weakening of the institutional Presidency in a larger context of polarised politics. Many of the fault lines of American society were thus left largely unaddressed, paving the way for the Trump campaign in 2016.

He is the author an editor of several books on the US presidency in both French and English. He is the author of L’impossible présidence impériale: Le contrôle législatif aux États-Unis (CNRS Éditions Paris, 2016). His research focuses on US political institutions, American Congress, and ideologies and political thought.

1. Reflections on Obama’s Leadership and the Prospects for Political Change in 21st Century America
Steven Skowronek

5. Obama and the Never-ending Struggle for Immigration Reform
Isabelle Vagnoux

6. War and Peace in Cyberspace
Frédérick Douzet and Aude Géry

8. From Clinton to Obama. The Politics and Political Economy of Health Insurance Reform
Nelson Lichtenstein

9. Criticize and Thrive. The American Left in the Obama Years
Michael Kazin