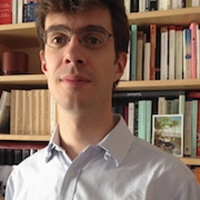 As a Marie Skłodowska-Curie Fellow at the University of Oxford (2019-2021), I am at work on a research project called “Suffering America: Writing Pain in Nineteenth-Century United States Literature” (USPAIN: H2020-MSCA-IF-2017 793204). It includes among other research actions the completion of book-length project, tentatively titled “The House of Pain”: Suffering, Writing, Thinking in Nineteenth-Century American Literature, that looks at the literary experience of pain and suffering from Emerson to Henry and Alice James.

A former student of the École normale supérieure, I hold an agrégation in English. I was appointed as Associate Professor at Université Paris Diderot in 2010 where I teach American Literature and Literary Translation. Before joining Paris Diderot, I also taught at Yale University and Keble College and Magdalen College, Oxford. Between 2014 and 2019, I was a junior research fellow at the Institut universitaire de France. From 2019 to 2021, I will be a Marie Skłodowska-Curie Fellow in the English Faculty at the University of Oxford.